The sun was shining brightly on a perfect Arizona day in early April. Our brains were set in relaxation mode, with no clue that a major shift in our lives was about to be set in motion. My husband and I had left our 3 year old back home in Wisconsin with my parents so that we could have a much needed vacation. We headed down to the resort’s pool complex to find that the only loungers available together werein front of the kiddie pool. I didn’t care; all I needed was the sun, a good book, and a fruity cocktail. I could tune out the noisy children like a pro (a survival skill that all moms learn). After some time, I glanced up from Big Little Lies and noticed a baby fast asleep in the shade two chairs down. She looked adorably peaceful as her mom and older sister played in the pool a few feet away. A voice inside my head said, “I could do that. I could have a second baby.” Followed by, “Where the f*ck did that come from?” My heart rate sped up and my chest grew painfully tight. I struggled to control my breathing as the anxiety attack took hold. The thought of having another child was shocking, foreign, and unwanted. It had popped up out of nowhere and needed to go away. Over two and half years ago, I had taken the possibility of more children off the table. My son, Adrian, would be an only child and that was that. It was a hard decision but I came to terms with it, locking any lingering baby-fever in a box marked “never open.” Close friends and family understood and didn’t blame me. Severe postpartum depression and anxiety had left its mark.

Four years ago, as a new mom-to-be, I had high expectations for myself and what life would be like as a parent. Immediately after Adrian was born, reality smacked me across the face. Instead of that post-birth feeling of euphoria, love, and joy that I had expected, I

felt dead inside. As the days went on, that numbness was replaced by fear, hopelessness, and despair. I felt incapable of doing the one job I had to do: mother my son. Following a diagnosis of postpartum depression and anxiety, I started medications and weekly talk therapy, but my condition continued to worsen. Dosages were increased; medications were switched out; more therapy sessions were added to my schedule; radical treatment options like Electroconvulsive Therapy were attempted. It wasn’t working. About a year and a half passed and my mental health deteriorated further. There were periods of intense suicidal ideation that at times became irresistible. My husband had to hide all the knives and sharp objects in the house. My medications were locked in a safe and dosed out daily. I knew that if I somehow survived this illness, I could never risk putting myself or my family through it again. Having another baby was unthinkable at the time. 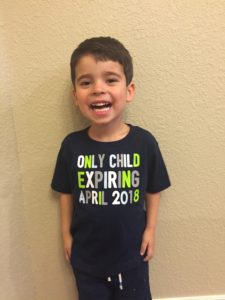 Eventually I found a relatively new treatment program that was proven to be highly effective for individuals with major depressive disorder and suicidal ideation. Dialectical Behavioral Therapy saved my life. As I started to improve and finally reached a state of full recovery, I still felt good about the decision to stop at one child. Life with my family felt happy and peaceful. Knowing that the risk of postpartum depression and anxiety is higher after the first episode, I felt no need to rock the boat. Hence, the anxiety that accompanied the thought of having another baby on that fateful day in Arizona. Reaffirming the belief that I was done having babies helped me return to a state of relaxation in that moment. Still the unwelcomed thought persisted.  For weeks I attempted to ignore it, not wanting to face the tough emotions it brought up. Therapy had taught me the importance of getting curious about my emotions. I knew this needed to be unpacked or it would continue to haunt me. I decided to bring it up with my husband, expecting him to look at me like I was crazy and reiterate that we were done having children. Instead, he loved the idea. He felt that we were ready and could handle whatever came our way. I was surprised again when my therapist said he thought it was a great idea. He was sure I’d be able to use my new skills to cope through the postpartum period in a much healthier way. My mom’s reaction was the same. Frankly, I was shocked. Why weren’t these people, who saw firsthand how bad it was, trying to talk me out of this? I know now that it’s because they believed in me, even if I didn’t fully believe in myself yet.

On a sleepless night while wrestling with the big decision, I grabbed my journal and made a three page pros and cons list of having another baby. Reading the list over and over again brought on a mental clarity that I hadn’t felt in more than a month. All the cons could be problem-solved. They were scary, but I was not about to let fear stand in the way of something my heart truly wanted. The pros made it obvious: baby #2 would never feel like a mistake, but not having him or her probably would. The list also helped me develop a sense of confidence in my ability to handle another baby and face the potential of postpartum depression and anxiety. I would do my research, talk to women who had done this before, learn from my experience, and make a comprehensive postpartum plan. Plus, my husband and I make a solid team; by working together to face any obstacles, we could have the family we’d always dreamed of.

After Adrian was born, I went into battle naked, unarmed, and blind to the demons I was about to face. This time around, I will enter the arena wearing a full suit of armor, carrying a sword made of Valyrian steel, and with eyes wide open. I know exactly what my demons look like and how to defeat them.  The fear is still there, though not as intense, and it feels like a natural human reaction given the stakes. There’s also a sense of courage and strength that comes from knowing that I have what it takes to survive. The postpartum period will be hard. And it will be worth it.